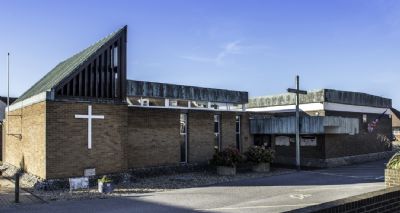 Since 1897 the population of Pevensey Bay was served by a chapel of ease, a daughter church to the parish church of Saint Nicolas Pevensey, and dedicated to Saint Wilfrid. It stood very close to the pavement on the south side of Eastbourne Road, in front of the row of shops. The building was of two storey construction, with limited facilities, the church being housed on the first floor. There was also a chapel of ease in Norman’s Bay.

In the 1960s, with increasing development of housing in the area, it was felt that a new church should be built, offering improved facilities for the growing population of young families, and at the same time allowing more space for the increasing number of local shops.

A site was made available close to the existing church on the shingle land between the road and the beach. In 1962 a committee was formed, led by the Vicar, the Revd John Robertson, and officers were elected from the congregation and the local community. The committee was to be known as the Friends of St Wilfrid’s Church, and members paid a subscription of 2/6d. Professional advisors were appointed and investigations commenced. In conjunction with the Diocesan Advisory Committee and the appointed architects, the local requirements were considered and plans were drawn up.

The building was to be of modern design and construction, making use of reinforced concrete beams where appropriate which allowed the forming of a light and airy interior. The church, with a seating capacity of 100, is furnished with a small vestry, and a digital Piano to support our worship. 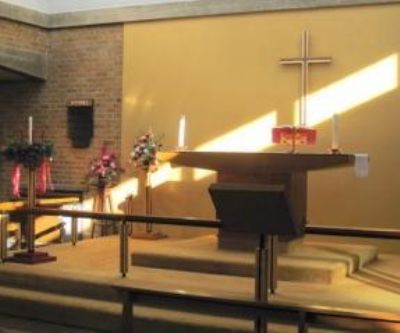 The development includes a recently refurbished hall for communal and social functions, with a kitchen, a committee room and toilet facilities. The two main sections are separated by an entrance hall, with sliding screens which can be opened when required to increase the seating capacity.

To cope with the growing ownership of cars, ample parking was included in the design. The exterior of the building was finished in brick, with adequate windows, and attractive copper cladding to parts of the roof. A small turret housed a single bell. The church has three stained glass windows, depicting Saints Wilfrid, Nicolas and Richard of Chichester.

The Friends were particularly involved with fund-raising, working in close cooperation with the Pevensey Parish Council. The total cost of the building was estimated to be £25,000 so a vigorous campaign of local appeals and events, involving the whole community, was set in motion. Over £10,000 was raised, the balance being made up in grants from Pevensey Parish Council, various funding providers and the Diocese of Chichester.

Work commenced in January 1968, and in April of that year, the foundation stone was laid by the Chairman of the Sussex Campaign, Sir Keith Blackburne and blessed by the Archdeacon of Hastings, the Venerable Guy Mayfield. Sir Keith commented that this was a unique occasion where a Parochial Church Council and a Parish Council had combined to build a church and hall.

The building was completed early in 1969 and was dedicated, by the Bishop of Chichester, the Rt Revd R P Wilson on 22nd March; the old church being demolished later that year.

Since then Saint Wilfrid's church has seen a steady rise in its Sunday attendance and continues to serve the peoples of the Parish of Pevensey, the vast majority of whom live in the Bay.

The hall remains a popular venue for events such as parties, dances, sales, concerts and coffee mornings, and is the regular meeting place for a thriving art group, the Women’s Institute and our popular monthly Craft Fair and Coffee morning. More information about our Hall and how to make a booking can be found on the Hall's website.
In the year 2000, the garden to the east of the church was brick paved and planted to commemorate the Millennium and form a Memorial Garden, which serves as the venue for our annual Armistice Day service.